The Creative Power of Locations: An Interview with Photographer @junebugkim

To get a sense of how photographer June Kim sees the world, you need only scroll through her stunning Instagram feed. June’s photos play with the shadows, angles, and texture of wanderlust-inducing locations, from the iconic White Sands of New Mexico to Spain’s La Muralla Roja. She portrays her surroundings with a sense of poetry, turning physical space into an idea rather than just a backdrop for her models (usually friends made through Instagram, she says).

Nowhere is this more clear than in June’s latest project, an ongoing photo series titled Hollywood is a Verb. “It’s about the nature of Hollywood as this transient place,” explains June. “It depicts a feeling of listlessness.” This concept comes to life in part one of Hollywood, which features a rocky, pastel-toned landscape just south of Los Angeles. In these images, Hollywood isn’t a stretch of real estate—it’s a metaphorical waiting room for those struggling to fulfill their dreams.

Recently, June set out to create part two of Hollywood. She used Peerspace to search for a location for her photo shoot, eventually settling on a striking mid-century modern home high in the Hollywood Hills. The house’s clean lines and surreal setting drew her in. “It felt like a dream,” she recalls.

Check out the modern mansion where June held her shoot 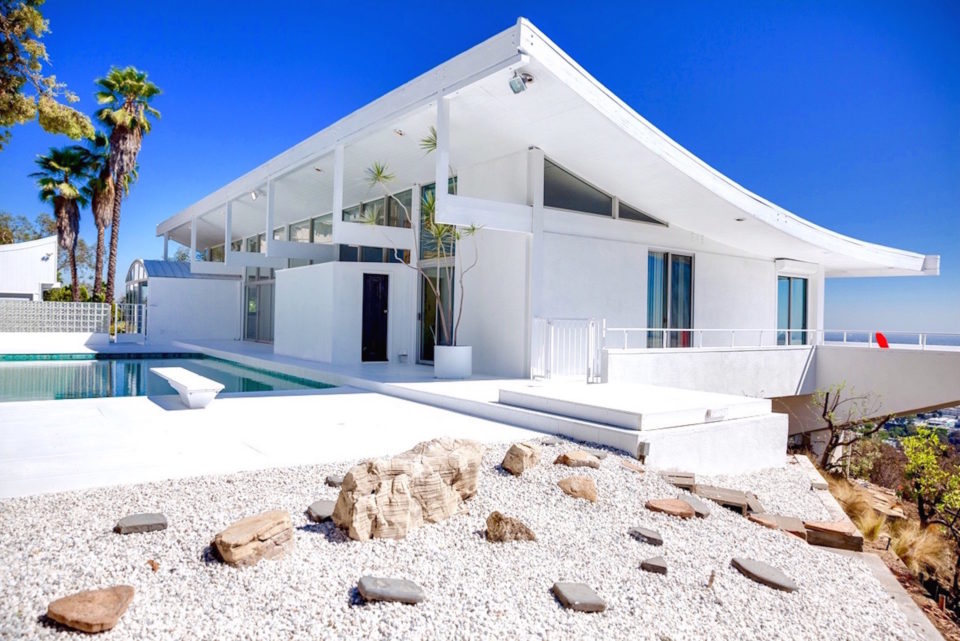 Below, we speak with June about her journey as a photographer and how this unique space guided her in creating these stunning shots.

The first time I saw photography as a serious art form—something that could be a career—was in my last year of college, when I took an introductory visual arts class. Being a business major, I wanted to get in some art classes before I graduated. The professor was a full-time photographer, and he brought in all of his old film cameras. I ended up getting one of my own from eBay; just a cheap film camera that took forever to shoot with. I realized that photography could help me to slow down and see the world through a different lens. I think my starting point was when my thoughts about photography shifted.

I started thinking about it as a career when I got my first full-time job as a photographer. That was in 2014 with Photojojo, an online camera store. It’s fun and quirky and sells a lot of things that you wouldn’t find in serious camera stores. I came on board as a product and lifestyle photographer, and that’s where I learned how to shoot professionally for a brand rather than just for myself.

Are you doing photography exclusively now?

I am. After Photojojo, I decided to try to become a full-time freelancer. That was last fall. It took five or six months for things to really build up—being a freelancer isn’t easy, I’ve learned.

At this point, I’ve made some really great connections, and I have steady work going on. It’s all either me doing the photography or assisting another photographer. I somehow got it all together after a bit of hustling in the professional world. You realize how many people are doing it. You need to figure out how to carve a space for yourself in photography.

How would you describe your style?

It’s definitely a blend of portraiture and the human figure, but I’m usually inspired by locations first. Things fall into place after that; I’ll know of someone who I’d love to shoot in this space that I’ve seen. For me, photography is very much about playing with the states of reality and idealism or some sort of dream state.

As I do more produced shoots, photography is becoming an escape within a particular location. Maybe it’s an attempt to tell a story, but it’s also about evoking a feeling. I’ve personally lived in this in-between state of reality and idealism. My head is always up in the clouds. Expressing that through photography has been really fun and personal, and I think that’s what people see as my style. It’s blending the human form with the spaces around us. In a more abstract way, I like to call it “reality versus dreams and that in-between space.”

Discover unique production locations for your next shoot

What was the concept for the Peerspace shoot?

It came out of a previous shoot that I did in LA called Hollywood is a Verb, which is the name of a painting by Ed Ruscha in the Broad Museum in Downtown LA. It’s about the nature of Hollywood as this transient place. I’ve witnessed that idea through a lot of my aspiring actor and model friends who are struggling to find their place and make their dreams a reality.

For the first Hollywood shoot, I worked with a friend who is an aspiring actor. It was inspired by his story and a location that I had seen called the Noguchi Garden. It’s in Costa Mesa, so it’s a little farther away from Hollywood but still in that Southern California region. The photos discuss this feeling of listlessness or wanting to make your dreams a reality in Hollywood.

In the most recent shoot, the location was a house in the Hollywood Hills. It was stunning, and it just made sense to bring that into the second part of the series. It felt like a dream, being in this beautiful home at the top of Hollywood overlooking LA. I think the concept is about evoking that feeling you have when you’re aspiring to be something in Hollywood. The location was pretty perfect for that.

What drew you to this location?

In particular, it’s a very stark, white house. We saw them repainting the entire house the day before. The house was deliberately built with unusual materials, but they covered it all with white paint. I think that’s what stood out to me. Visually, it was really interesting, but it also fit into this conceptual space that I was in.

Your Instagram feed features a lot of unique locations. How do you find them?

I always say I spend too much time on the internet. I’ll see photos of certain locations through Instagram, videos on the internet, or the work of people that I admire. Things just pop up here and there. Other times, I’ll find a location when I’m passing through a city.

There’s a place in LA called the ________ Square. For everyone who lives in LA, it’s a hideous park. I had no idea what it was; I just drove past it and saw these wild colors in this public space. I kept it in the back of my mind until I could go back and shoot something there with a friend. So I find locations mostly through the internet, but I also find them by being in the real world, walking around or driving by.

Do most of your shoots start with a location?

I think so. Sometimes, I’ll start with certain people that I want to shoot. My models aren’t usually professional models—they’re friends that I’ve met through Instagram or through other people. The Peerspace shoot was different because I wanted to try using someone who is a model. So it may start with people, but everything locks into place because I have a location in mind. It works hand in hand. The location pushes me to get it done because it’s such a huge part of the shoot.

If you could shoot anywhere in the world, where would you go?

Probably Japan, although it’s hard to say exactly where. The whole country is made up of 47 regions, and I’ve heard they vary from coastal cities to complete sand dunes. I’ve been to Japan a few times, but I’ve been dying to live there for a period of time and see all of it. I’m intrigued by the different types of spaces within the country.

Lately, it’s been trending towards produced shoots, but I try to keep it as real as possible. Photography has become this natural instinct in my daily life. When I’m walking with friends, they can tell if I see a spot that I need to photograph before we keep walking. It’s instinctual. It’s become a way of seeing things, and it keeps changing. The things that I notice in daily life do change, but locations are always a huge part. If I see a spot that I like, I’ll file it away for a shoot later. I’m learning to enjoy things in the moment.

Paint Nite Done Right: Our Tips for A “Meditative” Evening

8 Chicago Photographers Show Us What it Means to Rise Above

Brainstorming in a Brewery: Inside Freda Salvador’s Unconventional Offsite